Skip to content
Home » Records » The History of the Rector’s Cross of St. Philip’s Church, Harlem

The History of the Rector’s Cross of St. Philip’s Church, Harlem

On a cool Friday evening in Westchester County, New York at “The Rector’s Ball” on October 4, 2019, in front of parishioners, their families and guests, the Rector’s Cross of Harlem’s St. Philip’s Church was bestowed upon four much-deserving church members by the Parish’s tenth Rector, the Reverend Canon Terence Alexander Lee.  This auspicious occasion was part of the celebration of the 210th Anniversary of St. Philip’s Church.  The Rector’s Cross has been awarded to individuals who have given outstanding service to the community and the world.  Longtime members of St. Philip’s were particularly pleased to see the presentation because that distinct honor had not been bestowed on anyone in almost 45 years.

The first Rector’s Cross was bestowed during the 11am Eucharist upon the world-renowned African-American classical contralto vocalist Marian Anderson on Sunday, October 19, 1958 by the Reverend Dr. Milton Moran Weston II, the 6th Rector of St. Philip’s Church (1957-1982).1  That same day at the filled-to-capacity church was the occasion of St. Philip’s Annual Women’s Day celebration, during which all of the Lessons were read by women who also served as ushers, a role exclusively reserved for men in those days.  Consistent with that Sunday’s theme, Ms. Anderson urged each woman to realize her own potential.  The day she received the Rector’s Cross was not the first time Marian Anderson walked hallowed grounds of St. Philip’s Church.  In the mid-1920’s, she performed a special concert in the church auditorium that was sponsored by the St. Philip’s Men’s Club, decades before she became globally prominent.2, 3

Father Weston had initially hoped to present the award annually as “an outward symbol of inward grace” to the person whose life, ministry and service, like Ms. Anderson’s, reflects “great spiritual beauty.”2  The original Cross is believed to have been created in England and made of 150-year old hand-crafted gold.  Father Weston later requested and received permission from Ms. Anderson to have sterling silver copies of the original cross made, which were presented to future honorees.  Today the Rector’s Cross is embedded in a stainless steel shield inscribed with the following text: “Take up the shield of faith, with which you can extinguish all the flaming arrows of the evil one.  Take the helmet of salvation and the sword of the spirit which is the word of God. – Ephesians 6: 16-17”  The cross is held around the honoree’s neck by a ribbon of green, yellow and red, the official colors of the flag of the East African nation of Ethiopia.  This pays homage to principles on which St. Philip’s Church was founded, according to which Philip the Evangelist (not to be confused with Philip the Apostle) met, ministered to and baptized the Ethiopian eunuch.

According to informal parish history, when Father Weston began his rectorship in 1957, following immediately after the two influential rectorships of St. Philip’s fourth rector, the Rev. Dr. Hutchens Chew Bishop (1886-1933) and his son, St. Philip’s fifth rector, the Rev. Shelton Hale Bishop (1933-1957), Weston apparently wanted to put in place initiatives that could both continue St. Philip’s influence as exemplified by the Bishops and simultaneously establish his own distinct accomplishments.  As a civil rights activist and community leader, Weston knew the importance of celebrating the accomplishments of individuals who supported the contributions and advancement of African-Americans.

For unknown reasons, the custom of awarding The Rector’s Cross fell into disuse after Father Weston’s retirement in 1982.  It was Father Lee who revived the tradition.

After becoming St. Philip’s rector in 2018, Father Lee was immediately inspired to reestablish the Rector’s Cross.  He reflected, “I was excited to read about Father Weston presenting the Rector’s Cross to such deserving people.  I’d come out of the Diocese of Long Island, where Bishops awarded the Bishop’s Cross in recognition of service to the community.  One of the reasons I wanted to bring back the Rector’s Cross is because I too believe it is important to maintain traditions that build up our community.  It is also important to celebrate those in the community.  The Rector’s Cross shines a bright light on those who share their light in the community.  As a congregation, we are saying to each honoree this person is living or has lived a full Christian life in her or his time.  It is about ultimate service where Jesus tells us, ‘We came not to be served, but to serve.’  That is why I established a committee of parishioners who submitted names of prospective honorees to me, the Vestry and the rest of the Clergy.”

While the Rector’s Cross recipients honored in 2019 and 2021 may not be household names beyond their immediate communities (Ms. Gladys A. Clark-2019, the Rev. Deacon Fitzroy Edwards-2019, the late academic and historian John Hamilton Hewitt Jr.-2019, Mr. Robinson-2021 and Charles E. Williams III Esq.-2019), they are beacons of leadership and inspiration at St. Philip’s Church, and equally as deserving.  Their service continues the tradition of representing clear outward symbols of inward grace that reflect great spiritual beauty, as Father Weston envisioned.

When asked what he found remarkable about the Rector’s Cross, Father Lee’s reply was immediate.  “I was amazed to see the level of pride and humility on the faces of everyone present, and in the spirit of the recipients and their families.  In that moment I knew, “This is important!” 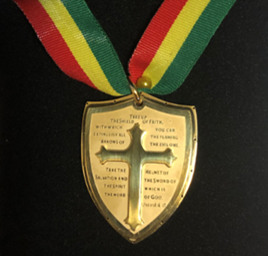