The story of The Connections Congregations in the Episcopal Diocese of New York (EDNY) had with The New York Colored Orphan Asylum (COA) came about because of a reference in Christ Church Riverdale’s (CCR) Wikipedia account. This reference  indicated that a key reason the fourth minister Reverend Dr. G. A. Carstensen resigned or was ousted by the vestry in 1917 was due to differences with the vestry. One key difference noted was that he allowed black youth to attend services at CCR from COA which had moved to Riverdale 10 years earlier. CCR vestry records confirmed this story as well as newspaper articles published during that time. This prompted an investigation as to whether additional churches, clergy and lay people associated with the EDNY had any connections with COA, and if so what was the nature of these connections?

COA, a charitable institution dedicated to children, was the nation’s first orphanage for black children  which makes the institution significant and the relationship with the EDNY a  compelling story.  COA serviced black and some Native American children from 1836 through 1944. The name changed to the Riverdale Children’s Association when it began to admit white children in 1945.  Eventually the institution folded into The Harlem-Dowling West Side Center for Children and Family Services.

The historical and anecdotal information shared in the content of this story mostly includes references to churches, clergy and lay people associated with the EDNY covering the period when the institution was known as the New York Colored Orphan Asylum (COA).  The book Angels of Mercy:White Women and the History of New York’s Colored Orphan Asylum by Dr. William Seraile published in 2011 by Fordham University Press served as a foundation for this story. This book along with archival information at the Schomburg Center for Research in Black Culture and the EDNY archives provided information on churches, clergy and lay people associated with the EDNY that had connections with COA from the early years through 1939.

This story is not a judgement on the EDNY’s churches, clergy and lay people support or connection with COA but simply a description of these connections.  Links to copies of source documents speeches, baptismal records or newspaper articles that provide specificity on the EDNY connections to COA are found in the complete text. The book Angels of Mercy:White Women and the History of New York’s Colored Orphan Asylum provides information on COA from the perspective of a group of white women who, aided sporadically by limited financial support from people of African descent, labored for over a century to maintain a home for black youth, first orphans and then also half-orphans and neglected, dependent, and delinquent children. Also this story is not a review or summary of the book which is worth reading if you want to gain an understanding of the challenges COA experienced during these years but simply an outline of the connections churches, clergy and lay people associated with the EDNY had to COA.

The impetus for this story follows a reference to a falling out between the Christ Church Riverdale (CCR) vestry and the fourth minister, Rector Reverend Carstensen who allowed black youth from the New York Colored Orphan Asylum (COA ) to worship at the church. There is general consensus from newspaper clippings and CCR archival vestry correspondence that one of the main reason he resigned as rector in 1917 was the vestry disagreement over the youth worshiping at CCR. Historically, COA was the first orphanage in the nation for black children, originating in Manhattan and moving to Riverdale, Bronx in 1907. This significance warranted researching the overall benevolence of other churches, clergy and lay people associated with the EDNY provided to COA. The connections of the black churches in EDNY with COA appear to have been generated from personal connections of a member employed by COA, and the white churches were responding with general charitable deeds.

It can be concluded that the relationship of COA with churches, clergy and lay people associated within the EDNY was developed mainly on personal connections of individuals within the churches or direct solicitation by COA, which generated charitable contributions. It started with the close relationship members of the Manumission Society had with the Quaker women that founded COA, continued when Dr. James McCune Smith, a St. Philip’s vestry member who was the COA doctor, and ended with the death of Clarence W. Robinson, who was employed over 20 years at COA and was first a member of St. Philip’s and then become associated with St. Martin’s.

This story is not a judgement on the EDNY’s churches, clergy and lay people support or connection with COA but simply a description of these connections. The COA institution from its onset and throughout its existence relied on philanthropic support from individuals and organizations.  During the life of the institution, when municipalities engaged in child welfare, COA was also a recipient of government funds. The organization it folded into, the Harlem Dowling West Side Center, follows the same philanthropic model. It is heartening to know that churches, clergy and lay people associated with the EDNY were party to philanthropic support for this organization, the first orphanage in the United States for people of African descent, throughout most of its history. 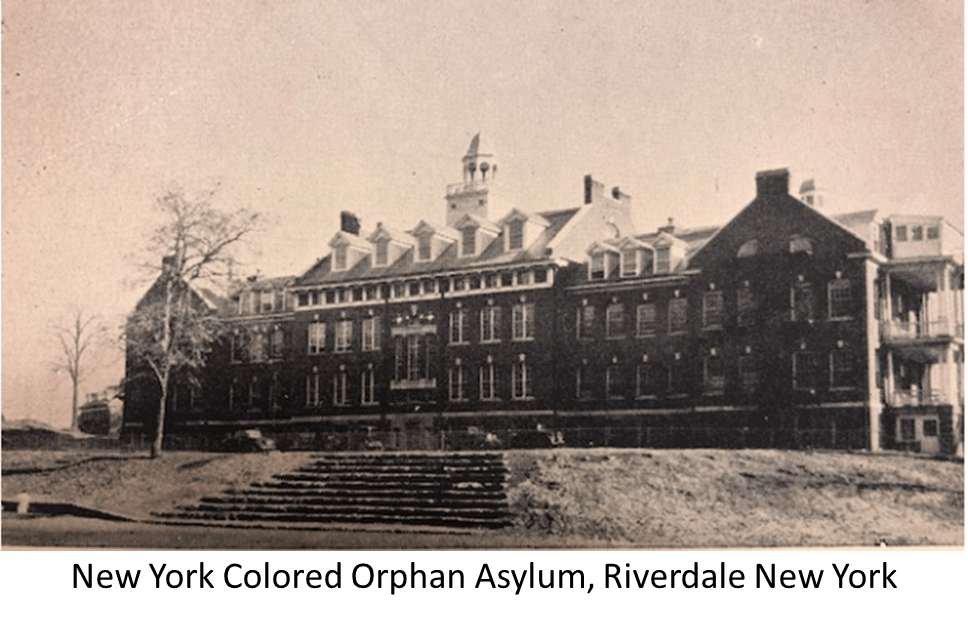