Carla Burns, who has chaired the Blessed Absalom Jones Celebration at the Cathedral Church of St. John the Divine since 2011, provides history of how the service became a major diocesan event. This is available by clicking on Read complete text. The biography of Absalom Jones used in the  service bulletin supports why the  Episcopal Diocese of New York has an inclusive celebration format.  This can be read by clicking this link  . Also the committee developed a Sunday school lesson for youth refer to the pdf. The 2021 Absalom celebration was a virtual event due to the COVID19 pandemic. The link associated with the sermon provides assess to the recording of the-service and this link is to a panel discussion : Absalom Jones and the Essential Worker: Yellow Fever 1793 – COVID 2019.

There are audio recordings for most of the sermons from the Commemoration of Absalom Jones at The Cathedral Church of Saint John the Divine services. Unfortunately the audio from the 2013 service was not available so a pdf is attached of Reverend Paul Roberts Abernathy ‘s sermon. As part of the maintenance of this website links to future sermons will be added. You can gain access to the sermons by clicking on the links below:

Blessed Absalom Jones has been honored every year since 2012, on the second Saturday in February, for opening the door to diversity in the Episcopal priesthood at the Cathedral Church of St. John the Divine. Many years prior to this, the New York Chapter of the Union of Black Episcopalians sponsored celebrations in various predominantly black churches of the Diocese. The celebrations included a church service, workshops, cultural performances and activities, and were attended primarily by black members of the Diocese.

In 2011, after Celebration attendance began to fall, it was decided that we should move the celebration to the Cathedral Church of St. John the Divine, the center of many Diocesan services and activities, so that Blessed Absalom could be celebrated by everyone, not just by black congregations. Over these past eight years, our diocese has learned to look at Blessed Absalom in a new way, not only as the first black priest in the Episcopal Church, but also as the first priest of the Episcopal Church who was not a white man. Blessed Absalom opened the Episcopal priesthood to the many diverse cultures that comprise our Episcopal priesthood today.

Initially, some members of the planning committee had difficulty with the changed location to the cathedral and expansion of focus. The yearly event at the cathedral promotes multicultural food and performances along with highlighting social justice activities. Everyone in the EDNY is encouraged to attend this service, which showcases the wide ethnic cultures of the Diocese beyond black and white Americans. The diverse planning committee changed the mindset of many by highlighting the legacy Absalom Jones left us by opening the Episcopal Church leadership beyond white men and for those who are not white to attend service with dignity. Most notably, his life’s history includes service for others in the community and lending his voice to righting the wrongs in society, such as slavery.

When we consider the history of this story we can see that he wanted to be a part of the Episcopal Church, even though he lived in an oppressive, racist, segregated society in eighteenth century Philadelphia. He became the founder of the African Episcopal Church of St. Thomas because he, Richard Allen and other Black congregants of St. George’s Methodist Church were pulled from their pews in November of 1787 and told that they could only worship in the balcony. Refusing to be subjugated and oppressed, Blessed Absalom chose to work to create a space where those of African descent could worship God in dignity and without fear of oppression.

Today, due to the hard work of Blessed Absalom and other brave, diligent and faithful people of African descent who worked with him, the doors of the Episcopal Church have been opened, not only to black people, but to diversity expressed in many ways such as other ethnicities and their cultures, women, LGTBQI people and many others. In 1802, Blessed Absalom Jones became more than the first black priest of the Episcopal Church; he was the trail blazer to the priesthood for all who would share the fruits of God’s love and justice.

His building of schools, housing and the uplifting of social organizations are included amongst his astounding accomplishments in eighteenth century Philadelphia. Blessed Absalom worked tirelessly to improve the lives of those in his community, to share God’s love and justice. This is why we have as our celebration theme each year, “Blessed Absalom Jones: Celebrate his triumph! Continue his work!” We know that the social ills that he worked to alleviate still plague us today. We celebrate him because we know we are called follow his lead today 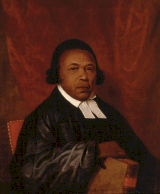 Click on the PDF file to view the submission