William Jay had an early interest in various philanthropic enterprises and reforms, and identified himself especially with the temperance, antislavery, and antiwar movements.  He was an enthusiastic member of the American Antislavery Society, whose constitution he drafted, Jay stood with Birney at the head of the conservative abolitionists, and by his calm, logical, and judicial writings exerted for many years a powerful influence. From 1835 to 1837 he was the society’s corresponding foreign secretary. In 1840, however, when the society began to advocate measures which he deemed too radical, he withdrew his membership, but with his pen he continued his labor on behalf of the slave, urging emancipation in the District of Columbia and the exclusion of slavery from the territories, though deprecating any attempt to interfere with slavery in the states.  He brought resolutions to Diocesan Convention end the support of slavery that were rejected.

Also, he was one of the founders (in 1816) of the American Bible Society, which he defended against the vigorous attacks of the High Church party, led by Bishop Hobart. He was judge of common pleas in New York from 1818 to 1820, and was first judge of Westchester County from 1820 to 1842, when he was removed on account of his antislavery views. 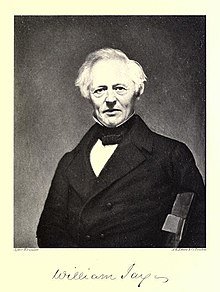