• Church Awakens-African Americans and the Struggle for Justice

Bishop Dennis was ordained a deacon in 1956 with his first appointment as curate at the Cathedral of St. John the Divine in New York; he was the first black American hired as clergy on the Cathedral’s staff. From 1956 to 1960 he assisted the Reverend Tollie Caution, Secretary of Negro Work, in developing a series of conferences on race relations.   He returned to St. John’s as a Canon Residentiary in 1965.   He was also a founding member of the Union of Black Episcopalians in 1968.  In 1979 he was elected Bishop Suffragan of the Diocese of New York in 1979. 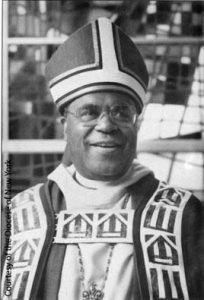