Bishop John Henry Hobart (September 14, 1775 – September 12, 1830) was the third Episcopal bishop of New York (1816–1830). Bishop John Henry Hobart was in conflict with John Jay who deemed the bishop as part of the clergy that used the Bible to justify slavery.  Bishop Hobart expressed sentiments that he  wanted to delay emancipation, and limit the evangelicals and their American Bible Society. He is also known for vigorously promoting the extension of the Episcopal Church in Central and Western New York.  And in addition he founded the General Theological Seminary in New York City and Geneva College, later renamed Hobart Free College in 1852 after him, in Geneva, in the Finger Lakes area of upstate New York. 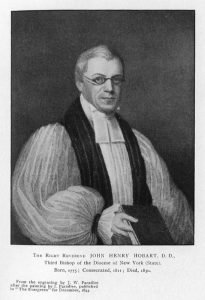