A writer, lawyer and educator, Pauli Murray became the first African American woman ordained the priesthood in the Episcopal Church. Born Anna Pauline Murray in Baltimore, she was an early civil rights activist, committed to dismantling barriers of both race and gender.

A graduate of Hunter College in 1933, Murray went on to graduate first in her class from Howard University Law School. She earned a Masters of Law at University of California Berkeley and passed the California bar in 1945. Having been rejected based on her race and gender from University of North Carolina and Harvard University,respectively, in the 1940s, she became the first African American to be awarded a Doctor of Juridical Science from Yale University Law School in 1965. Murray served on the President’s Commission on the Status of Women and the Equality Committee of the ACLU and was a founding member of the National Organization for Women. As an educator, she was Vice President at Benedict College in South Carolina and taught at the Ghana School of Law in Accra and later at Brandeis University. In 1973, after the death of her beloved friend Renee Barlow, Murray felt compelled to dedicate the remainder of her life to the church.

She completed her Master of Divinity at General Theological Seminary in 1976 and was ordained at the National Cathedral in 1977. She served at Church of the Atonement in Washington, D.C. from 1979 to 1981 and at Holy Nativity Church in Baltimore until her death in 1985. A prolific writer, Murrays extensive bibliography includes writings on law and civil rights, a volume of poetry, and two memoirs, including Proud Shoes: The Story of an American Family. 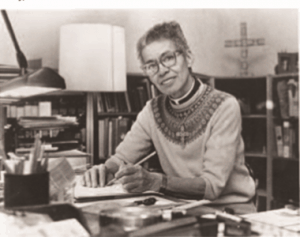