The Reverend Paul Roberts Abernathy, a native of St. Louis, Missouri, received his Bachelor of Arts degree, majoring in political science, from Westminster College, Fulton, Missouri, and his Master of Divinity degree from The General Theological Seminary, New York City.

In 1977, ordained as a deacon and, in 1978, as a priest, Father Abernathy served congregations in Columbia, Missouri, Chicago, IL, Charleston, SC, and Washington, DC. On February 1, 2015, he retired, moving to Spartanburg, SC, to begin his “rehirement” working for his wife at their bed & breakfast and events facility, Clevedale Historic Inn and Gardens. Since late December 2015, he began his tenure with the community of Epiphany Episcopal Church, Laurens, SC, as priest-in-charge, part-time.

Father Abernathy held a variety of positions in the church, among them, a four-time General Convention deputy, stints on many committees and commissions in the dioceses where he served, and, for the national church, on the committees of Social Responsibility in Investments and Structure. For many years, before its closing, Father Abernathy was an adjunct faculty member of the College of Preachers of the Washington National Cathedral Foundation, Washington, DC.

An avid writer and blogger, in 2013 ,Father Abernathy  published a book of sermons, For the Living of These Days. He is joyously married above his station of life to the former Pontheollhe Divine  A. Mack of Bishopville, SC, who always is the best reason to know him.  On February 16, 2013, Father Abernathy  was the preacher at the  Commemoration of Absalom Jones  at the Cathedral Church of Saint John the Divine. 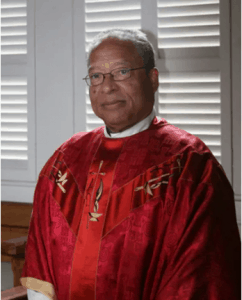