• Church Awakens-African Americans and the Struggle for Justice • The History of the Rector’s Cross of St. Philip’s Church, Harlem

The Rev. Dr. M. Moran Weston, who led one of Harlem’s most prominent churches, helped found what became the nation’s largest black-owned financial institution and built housing for thousands, died on May 18 at his home in Heathrow, Fla. He was 91.

In 1948, Dr. Weston joined with 14 others to found the Carver Federal Savings Bank. He was principally responsible for raising the $250,000 for a federal charter after the state had denied it a charter. He went on to serve as both president and chairman of Carver, which today describes itself as the largest independently owned black financial institution.

He saw no oddity in a priest’s being a banker.

”A banker-priest is really no more strange than an educator-priest or a social worker priest,” he said in an interview with Ebony magazine in 1969.

He also thought it natural for a priest to be a developer. By skillfully tapping federal antipoverty funds and donors like his friend Brooke Astor and her foundation, he built a succession of housing developments, a community center and a nursing home, among other things.

When Columbia University, which made Dr. Weston its first black trustee, named a lectureship for him in 1998, its citation said:

”To visit the streets of Harlem and Morningside Heights is to encounter the tangible results of your visionary work, whether it is a child care center, housing for the elderly and the mentally ill, a condominium high-rise, or a business started with a Carver loan.”

Milton Moran Weston II was born on Sept. 10, 1910, in Tarboro, N.C., the son and grandson of Episcopal priests. He studied under his mother at a parochial school his grandfather had founded and followed his mother and father to St. Augustine’s Junior College in Raleigh, N.C.

After graduating as valedictorian, he yearned to escape the racial prejudice, sometimes violent, that he witnessed and experienced in the South.

”I knew I’d never live to be a man in North Carolina, so I left,” he said.

In 1928, he enrolled at Columbia, where he was one of five black undergraduates at the time. He demonstrated for civil rights, protesting against lynching in the South and whites-only clubs in New York. He wrote a column called Labor Forum in The Amsterdam News and helped organize civil rights rallies in Madison Square Garden.

He worked as a real estate broker for a decade beginning in 1947.

Carver was intended to help black homeowners obtain first mortgages, a service white banks considered too risky. Dr. Weston said he knew of someone who could not get a loan from a bank where he had a substantial deposit.

Before Carver opened, first in a small storefront, there was only one black above the rank of janitor working in a New York bank. Blacks trained at Carver went on to work at other banks throughout the city. Carver’s assets today exceed $2 billion.

Dr. Weston became associated with St. Philip’s Episcopal Church in Harlem in the mid-1940’s. The church, at 214 West 134th Street, was founded in 1818 by blacks who were not allowed to attend regular services at Trinity Church on Wall Street.

In 1945, he helped found the church’s credit union, then served as business manager of the church. He left to be executive secretary of the department of Christian social relations in the National Council of the Protestant Episcopal Church.

Meanwhile, he earned bachelor’s and master’s degrees in divinity from the Union Theological Seminary and a doctorate in social history from Columbia.

He married the former Miriam Yvonne Drake, a clinical psychologist, in 1946. He is also survived by his sister, Catherine Weston of St. Louis; his daughter, Mother Katherine Weston of Indianapolis, a nun of the Greek Orthodox Church; his son, Gregory, of New Rochelle, N.Y.; and two grandchildren.

In 1957, he returned to St. Philip’s, then one of the nation’s largest Episcopal churches, to be its sixth rector. His first project was to organize maintenance workers in nearby buildings to sweep in front of their buildings on the days when Sanitation Department cleaning trucks did not come.

In his years as a minister, he exercised influence in some ways comparable to that of Adam Clayton Powell Jr., pastor of the Abyssinian Baptist Church in Harlem and a member of Congress. For example, in 1964, when Mr. Powell called for a boycott of New York City schools to protest segregation, Dr. Weston, who was rector of St. Philip’s, received comparable attention by arguing that it did no good to keep children out of school.

At various times, he taught at the State University at Albany and elsewhere; organized monthly breakfast meetings of black leaders; and served on many boards, including that of the NAACP Legal Defense and Educational Fund Inc., which was founded by Thurgood Marshall, a St. Philip’s member.

Dr. Weston’s leadership style was persistent and low key; his sermons intellectual in tone. He preferred to be a catalyst in the background.

”I do nothing,” he said in an interview with The New York Times in 1986. ”I cause things to happen. If I have a gift, it is to encourage people that they can do the impossible.” 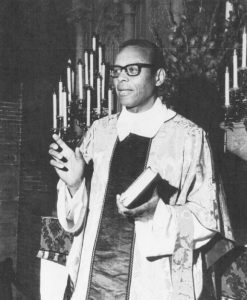