The Reverend Canon Kelly Brown Douglas is the Canon Theologian at the Cathedral. In 2017, she was named Dean of Episcopal Divinity School at Union Theological Seminary in New York City. Kelly is considered a leader in the field of womanist theology, racial reconciliation, sexuality and the black church.

A native of Dayton, Ohio, Dr. Douglas was one of the first 10 black women to be ordained a priest in the Episcopal Church. She was an Associate Priest at Holy Comforter Episcopal Church in Washington, D.C. for over 20 years.

She holds degrees from Denison University and obtained her Ph.D. from Union Theological Seminary. Her newest book is: Stand Your Ground: Black Bodies and the Justice of God, released in May 2015 by Orbis Books. She splits her time between New York and Washington. On Saturday February  7, 2015, the  Reverend Canon Kelly Brown Douglas was the preacher at the Commemoration of Absalom Jones at the Cathedral Church of Saint John the Divine service. 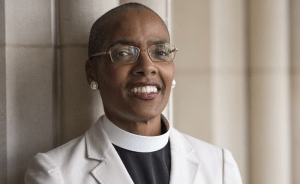