The Reverend Canon Gregory “Greg” Jacobs retired in 2019 as the Canon to the Ordinary & Chief of Staff in the Episcopal Diocese of Newark, which covers the northern-most third of New Jersey.  In that capacity, he served as the principal advisor to the Bishop on matters involving policy, transition ministry, and programs involving clergy and congregations in the diocese.

Canon Jacobs received his A.B. degree in Urban Studies from Princeton University’s Woodrow Wilson School of Public and International Affairs in 1974, with a Certificate of Studies in African-American Studies.

He is a 1977 graduate of Columbia University School of Law and practiced corporate employment and discrimination law at the Cleveland, Ohio law firm of Thompson, for 18 years.

In 1995, Canon Jacobs received a Master of Divinity degree from Bexley  Hall Seminary/ Colgate Rochester  Divinity School in Rochester, NY, and was ordained deacon and priest that year i the Diocese of Ohio.  For the next eleven years he served the Episcopal Diocese of Ohio first as parish priest  (St. Paul’s Church, Akron and S. Philip’s Church), then on diocesan staff  (Bishop’s Assistant for Urban Congregations  & Urban Youth) and finally, as Canon for Mission and Ministry at Trinity Cathedral  in Cleveland.

He then accepted a call in 2006 to the diocesan staff in the Diocese of Massachusetts where he served as Assistant to the Bishop for Urban Congregations until July 2008.

He has served on the Board of Bexley Hall Seminary, the Standing Committee on Constitution & Canons, the Board for Transition Ministry, and on server boards, committees, and commissions of the Episcopal Church.  He has been elected clerical deputy to General Convention four times.  He is als a lifetime member of the Union of Black Episcopalians.

On February 11, 2017, The Reverend Canon Gregory Jacobs was the preacher at the Commemoration of Absalom Jones at the Cathedral Church of Saint John the Divine service. 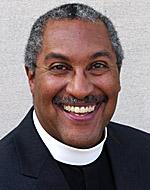