• Church of the Intercession, Manhattan

Frederick Boyd Williams was a prominent black Episcopal priest who worked internationally on behalf of Civil Rights and social justice movements, advocated for Africa and the African Diaspora within the Anglican Communion, and served tirelessly to improve the social, political, and artistic life of his parish, the Harlem community, and New York City. n 1973 Williams became the Vicar for the Church of the Intercession. Originally established in the nineteenth century and later a chapel of Trinity Church in New York City, the Church of the Intercession was a prominent part of religious and cultural life in Harlem. Williams became its first black rector in 1976, the same year that the congregation became an independent parish of the Diocese of New York. He remained the rector until his retirement as Pastor Emeritus in 2005.  He is one of five signers of the original incorporation papers for the Union of Black Clergy and Laity which changed its name to Union of Black Episcopalians.  The national organization was founded in St. Philip’s February 8, 1968. 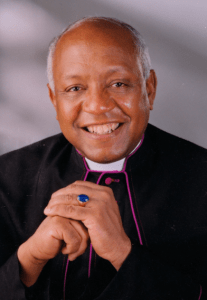