• Church Awakens-African Americans and the Struggle for Justice

• St. Philip’s Church, Harlem    • The Church of the Messiah, Manhattan

Episcopalian priest, missionary, and educator, Alexander Crummell was founder of the American Negro Academy in 1897, America’s first major black scholarly society. As a religious leader and an intellectual, he advocated for educational opportunities and leadership among young black Americans.  Alexander Crummell was born in New York City and attended St. Philip’s church.    He noted in his sermon 1844-1894 The Shades and the Lights of A Fifty Years’ Ministry Jubilate delivered at St. Luke’s Church, Washington DC., December 9, 1894 celebrating 50 years of ministry,  “At an early period  of my boyhood stimulated by the cathechising of  my pastor, Rev. Peter Williams, then rector of St. Philip’s Church, New York and kindled as I well remember, by a sermon  Doctor (afterwards the Right Rev. Bishop ) Whittingham, I determined to prepare for holy orders.”  He was denied entrance to General Theological Seminary because he was black.  He received his theological education in the Diocese of Massachusetts. In 1842 he was ordained to the diaconate and two years later to the priesthood by the Bishop of Delaware. In 1844 he established a small mission in Philadelphia where he became involved in politics including the abolition of slavery.  In the 1845 Journal of the Proceedings of the Sixty -First Convention of the Protestant Episcopal Church of the Diocese of New York he was noted as transferring from the Diocese of Pennsylvania and minister of the Church of the Messiah.    The Church of the Messiah congregation generated from a mission started in 1836 by Reverend Niles of St. Ann’s church Brooklyn that met in lower Manhattan.  It is understood the funds were obtained from England to sustain this congregation through 1858.  (These references are from the Journal of the Annual Convention of New York and the “Jubilate” sermon.) 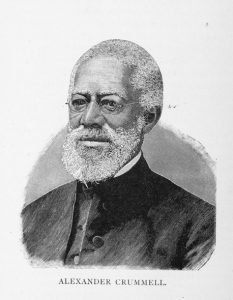