Politician. Public Historian. Community Organizer. Christian.
Byron Rushing served in the Massachusetts House of Representatives from 1983 to 2018, where his priorities were human and civil rights; local economic and housing development; and housing and health care for all.
From 1972 to 1985, he was President of the Museum of Afro-American History, when the Museum purchased and began the restoration of the African Meeting House, the oldest extant black church building in the United States, in 1979, Byron oversaw the lobbying effort in Congress to establish the Boston African American National Historical site, a component of the National Park Service.
During the 1960s he was active in the civil rights movement, working for CORE (Congress of Racial Equality) and for the Northern Student Movement. He directed a group of organizers, Roxbury Associates who helped to found the Lower Roxbury Community Corporation, one of the first CDC’s in the nation.
Byron was first elected a lay deputy to General Convention in 1973; the chaplain to its House of Deputies in 1994–the first layperson to hold this position. He now serves as Vice-President of the House of Deputies.
During all his career Byron has worked for and with community-based organizations–for greater political participation and against neighborhood debilitation. In his retirement he continues his work to increase the understanding of the history of poor and working class people; and of people of color in The Episcopal Church. 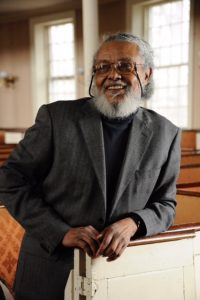