Ruby Nell Sales looks at her work as a calling rather than a career. She answered the call to social justice as a teenager at Tuskegee Institute where she joined the Student Nonviolent Coordinating Committee (SNCC) and worked on voter registration in Lowndes County, Alabama.

Sales received a B.A. degree from Manhattanville College and attended graduate school at Princeton University. Sales received a Masters of Divinity degree from the Episcopal Divinity School where she was an Absalom Jones Scholar. While there, she developed a reputation as a preacher and has preached at churches and cathedrals around the nation.After divinity school, she founded and still directs a national nonprofit organization, the SpiritHouse Project.

As a social justice activist, Sales’ work is cited in several books, journal articles and films such as Taylor Branch’s At Canaan’s Edge: America in the King Years 1965-68; Broken Ground: A Film on Race Relations in the South; Dan Rather’s American Dream Segment; and the newly released book, Blood Brother: Jonathan Daniels and His Sacrifice for Civil Rights by Rich and Sandra Neil Wallace. Sales is one of the founders of SAGE Magazine: A Scholarly Journal on Black Women. As a social critic, Sales has published works in several journals, newspapers and magazines and is a frequent guest on Sirius XM Radio Inside the Issues with Dr. Wilmer Leon. During summer 2016, Sales was keynote speaker at a gathering of nationally renown theologians to discuss Public Theology Reimagined hosted by and later broadcast on the NPR program, On Being with Krista Tippett.

Sales has received numerous awards and honors. She was selected and honored as a Veteran of Hope by Vincent G. Harding in 2004 and taught a class with him at Morehouse College on “After the March on Washington” in 2012. She continues to write and observe on Movement History. Sales became a national HistoryMaker (www.HistoryMaker.com) in 2009. In August 2013, Sales was awarded the Samuel DeWitt Proctor Conference Living Legacies Civil Rights Recognition Award. In 2014, she was inducted into the Morehouse College Martin Luther King Jr. Board of Preachers and became a recipient of the Beautiful Are Their Feet Award from the Samuel DeWitt Proctor Conference. In May 2015, Sales received an Honorary Doctorate Degree from West Chester University in Pennsylvania. Sales was honored with the national Martin Luther King, Jr. Peace Award from the fellowship of Reconciliation (FOR) at their centennial celebration in November 2015. An oral history of Sales is housed at the Library of Congress and she was selected as one of fifty African Americans from the Civil Rights Movement to be spotlighted in the new Smithsonian Museum of African American History and Culture in Washington, DC
which opened September 2016.

Sales has made the struggle for racial justice one of the centerpieces of her work through the SpiritHouse Project. Since 2007, she has worked to expose the state sanctioned deaths of African Americans by White police, security guards and vigilantes by compiling a national database on these events; offering spiritual, financial and organizational support to families; and by exposing these activities through church and community meetings, forums, and press conferences around the nation. In fall 2014, she co-sponsored a Teach  n/Preach In with the Samuel DeWitt Proctor Conference, Eden Seminary and Christ the King Church in St. Louis, Missouri in response to the police shooting of Michael Brown in Ferguson, Missouri. During thespring of 2015, she organized a Teach-In in Philadelphia which exposed the Means and Tools of Oppression that plague most communities of color. In March 2016, Sales and SpiritHouse Project organized a national Day of Action in Washington, DC entitled, Stop the War on Our Children, during which women from around the nation gathered to acknowledge young victims of state sanctioned violence with a silent procession from the White House to the US Capitol, a public hearing hosted by Dr. Wilmer Leon, and the delivery of caskets containing the names of victims to key Senate, House and Supreme Court leadership. A report, “From the Womb to the Tomb: The History of Police Violence Against African Americans,” is forthcoming.

Recognizing a need to nurture the hope that still resides in young people as well as to revive an intergenerational community and human compassion, in 2016 the SpiritHouse Project introduced Hope Zones.™ They are alternative learning spaces designed to strengthen the hope, courage, reason and will of young people to individually and collectively stand up for themselves with dignity, clarity and nonviolent persistence. Hope Zones™ are sanctuary sites of learning, intergenerational connection and community formation which offer diverse communities an opportunity to work toward the common goal of advancing democracy and non-violence.

Sales continues to preach and teach all around the United States.  On February 10, 2018, Ruby Nell Sales was the preacher at the Commemoration of Absalom Jones at the Cathedral Church of Saint John the Divine service. 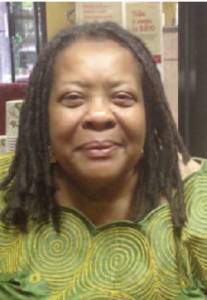