Ralph Ellison (1914 –1994) was a novelist who grew up in Oklahoma City, part of the second generation of blacks born after the end of slavery in the United States. Ellison’s literary talents became evident in his youth, and after a move to New York City, he became part of the burgeoning Harlem Renaissance, forging friendships with other pioneering authors and artists like Romare Bearden and Richard Wright. Invisible Man, his best-known work, was composed during the mid-1940s and published in 1952. The novel is a visionary exploration of black identity, influenced by contemporary themes of existentialism, socialism, and the alienating violence of racism. Invisible Man won the National Book Award for Fiction in 1953.  In 2019, he became the fifth black man inducted into The Cathedral Church of St. John the Divine’s American Poets Corner. The Cathedral’s American Poets Corner is modeled on the Poets’ Corner at Westminster Abbey. No writers are entombed within the Cathedral, as is sometimes the case at Westminster Abbey; rather, stone tablets are carved with names, dates, and a line from each writer’s work. 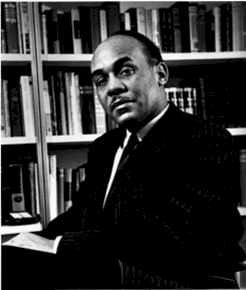