Phillis Wheatley was the first black and second woman to publish a book of poems in the United States.  She was born around 1753 in Gambia, Africa where she was captured by slave traders, brought to America in 1761 and sold to the Wheatley family in Boston, Massachusetts.  In 2008, Wheatley became the first black woman inducted into The American Poets’ Corner at the Cathedral  Church of St. John the Divine. The Cathedral’s American Poets Corner is modeled on the Poets’ Corner at Westminster Abbey. No writers are entombed within the Cathedral, as is sometimes the case at Westminster Abbey; rather, stone tablets are carved with names, dates, and a line from each writer’s work. This link is a short biography from the Academy of American Poets that includes a selected bibliography of her work. 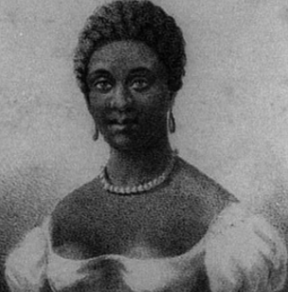