Nell Braxton Gibson was awarded the Bishop Cross in the 2016 Diocesan Convention.

“From time to time God raises up among us people of such brilliant self offering and strength of character that they themselves become the bright light by which others may see more clearly. Nell is that for us. Born in the segregated south to educator parents, lifetime members of the NAACP, she became involved at an early age in the student movement of the Civil Rights struggle. Galvanized by the assassination of family friend Medgar Evers, the Braxton family’s commitment to overcoming racial injustice became Nell’s lifelong resolve. This has not been without cost. She spent time in the Fulton County Jail for her protest outside the Georgia State Capitol, and was arrested protesting the South African Consulate in New York City.

Nell has fully engaged at every level the struggle for equality and civil rights in the United States and in our Church, but was also moved to work in support of newly independent African states. From college she traveled to Tanganyika in this cause, and later to Namibia and South Africa. There, she was made by Archbishop Desmond Tutu a member of his steering committee of international religious leaders, working toward the end of apartheid.

Among the many positions she has filled in this diocese she has chaired the Committee on Reparations for Slavery. She was also Associate General Secretary for Inclusiveness and Justice at the National Council of Churches, and Coordinator of the Episcopal Urban Caucus. Among the many honors she has received the President’s Award and the Dr. Verna Dozier Honor Award from the National Union of Black Episcopalians, of which she is a life member; a Trinity Parish Transformational Fellowship; and the Episcopal Church House of Deputies Medallion for Exemplary Service. She also carried an Honorary Doctor of Divinity from Berkeley Divinity School.

In her riveting memoir, Too Proud to Bend, Nell likens her generation of Civil Rights soldiers to the Moses generation which crossed the harsh wilderness of struggle and resolve that they might make possible the Joshuas who are privileged to enter the Promised Land. Nell’s life does honor to all who have given themselves to such larger cause, and by doing so, have brought the dawn of a new day to suffering people.

Therefore, in recognition and gratitude for her service to the gospel imperative of racial equality and social justice, her service to her diocese and the larger Church, offered to the glory of God, we, on this 4th day of November 2016, in the fifth year of our consecration, do award her the Bishop Cross.” 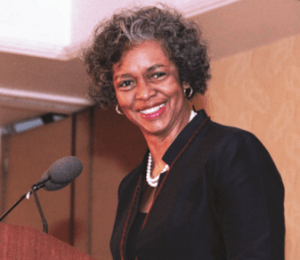