John Jay II is the grandson of the United States’ first Chief Justice John Jay. He, like his father before him, worked within the Episcopal church to raise their voices against the institution of slavery and discrimination towards people of African descent.  An example of his strong position against slavery and discrimination is referenced in The Story of the Episcopal Diocese of New York and The Riverdale Colored Asylum.

He also presented a resolution to the 1844 Diocesan Convention when he was an alternative lay delegate from St. Matthew’s Church, Bedford to allow for the seating of  black delegates.  Additionally, he was elected representative of St Philip’s “and answered the roll call. His voice — that of a white man — was the only voice allowed at that convention to represent St. Philip’s. He ensured the resolution to seat black delegates was introduced each year until it passed in 1853. John Jay II presented resolutions at the 1860 convention of the Diocese of New York condemning slavery which were tabled indefinitely. Ultimately, at the 2019 convention of the Diocese of New York the Reparations Committee presented these resolutions for a vote and they were unanimously passed.

You can learn about his life, the positions he took against the institution of slavery and the discrimination the church had toward people of African descent from the September 1976 article JOHN JAY II: ANTISLAVERY CONSCIENCE OF THE EPISCOPAL CHURCH by Robert Trendel published in Volume XLV September 1976 number 3 of the Historical Magazine of the Protestant Episcopal Church. The Diocesan Reparation Committee prepared a short video about the tabled 1860 anti-slavery resolutions which also sheds light on his character. 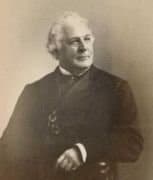