Jessye Mae Norman (born September 15, 1945 and died September 30, 2019) is an American opera singer and recitalist. A dramatic soprano, Norman has been inducted into the Georgia Music Hall of fame and is a Spingarn Medalist.  Apart from receiving honorary doctorates and other awards, she has also received the Grammy Lifetime Achievement Award, the National Medal of Arts, and is a member of the British Royal Academy of Music.  In 2009 as part of her series Honor!: A Celebration of the African American Cultural Legacy, produced by Carnegie Hall, Ms. Norman presented a program of music from  Duke Ellington’s  three “Sacred Concerts” at the Cathedral Church of St. John the Divine. 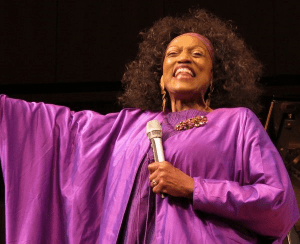