James F. Brown (1793 to 1868)  was buried in  Beacon’s Saint Luke’s Church cemetery. The  obituary from The Fishkill Standard, in January 18, 1868,  let us know that ” he was a  resident of the village  for nearly forty years, died at his residence on the Verplanck estate, on Tuesday. Mr. Brown was well -known to nearly all our citizens. He was formerly a slave in Maryland, who escaped, and by industry accumulated funds enough to purchase the freedom of his wife. For about thirty-six years, he has lived with the Verplanck family, first as a coachman, but for the last twenty years as head gardener. He was, as near as we can learn, about 73 years of age. He assisted in the building of the Episcopal Church.” 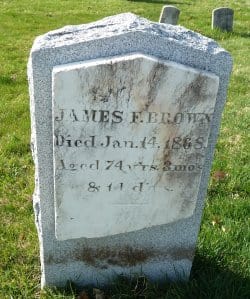