Harriet Jacobs was born into slavery in North Carolina, and  a heroine of the abolitionist movement. Her memoir, Incidents in the Life of a Slave Girl, was published under a pseudonym in 1861 and detailed, most searingly, the abhorrent violence of slavery, particularly as experienced by women and girls. Jacobs managed to escape to the North at the age of 29, and became part of the abolitionist community in New York, where she first began to compose her groundbreaking autobiography.  In 2019 she became the third woman of African descent to be inducted into the Cathedral Church of St. John Divine’s American Poets Corner.  The Cathedral’s American Poets Corner is modeled on the Poets’ Corner at Westminster Abbey. No writers are entombed within the Cathedral, as is sometimes the case at Westminster Abbey; rather, stone tablets are carved with names, dates, and a line from each writer’s work. 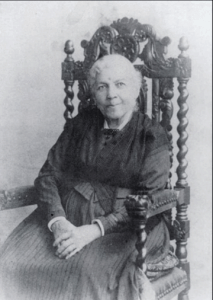